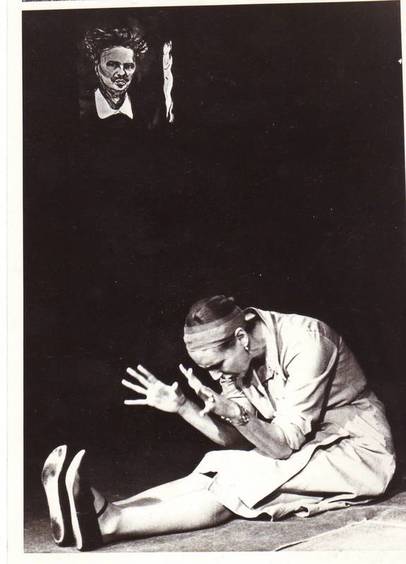 This photo was taken as acclaimed Swedish actress Fillie Lyckow performed the first play I wrote. I also directed it, at the Blue Tower Theater, the name I gave to the makeshift theater that I designed and had built inside the Strindberg Museum. Classic Swedish national playwright August Strindberg had lived in this building, which he called the Blue Tower, because it rose to a pointed tower that sported a blue roof.

While a guest artist-in-residence at the Strindberg Museum forsix months, an award granted me by the American Scandinavian Foundation, New York, I was able to get the City of Stockholm to produce my very first play, The Woman Will Play Strindberg’s Kristina, about an actress struggling with the roles in plays by Sweden’s at times misogynistic national playwright, August Strindberg. Though I feared the play might anger Swedes, the play enjoyed rave reviews; was performed on radio drama; toured throughout Sweden.

I also directed, produced with Swedish grant money, several original plays, and plays by August Strindberg at various theaters. Most remarkable was the Intima Teater (Intimate Theater), which had been Strindberg's own personal theater, where he helped direct his more avant-garde plays, which the leading Swedish theater (Dramaten), refused to produce, in spite of Strindberg's international acclaim.

After Strindberg died, that theater became a meeting hall for the Graphic Workers Union. Since then, the union members had refused to even speak with theater people, whom they disdained, about turning their meeting hall back into a theater. I met with the Creative Director of this union; spoke my broken Swedish, which charmed him, and persuaded him Strindberg himself would have welcomed his theater being turned back into a theater. Happily, the union did just that.

In order to get financing for productions at Intima, I scheduled a meeting with the Culture Minister of Sweden. Usually grants are given only to organizations, not individuals. Since I represented myself and no organization, I appealed to the Minister to give funding to me personally; shared with him my budget and production schedule. He warmly agreed to request that parliament make a remarkable grant to me, an individual, which they did. I used this funding to put up a few productions at Intima before I left Sweden. Intima Teater is now considered a Swedish cultural gem.

Also, in Sweden, I connected with the Sami people, a peace-loving folk that has survived for more than two thousand years above the Arctic Circle. I learned from them how their love of peace and harmony is related to how they balance the Feminine with the Masculine. Males and females contribute equally to their society. Males honor the Feminine, such as caring for nature; females honor the Masculine, such as helping to herd the reindeer. I believe that all societies on Earth can only survive if they find a true balance between the Feminine and the Masculine. My work reflects that deep belief.

Presently available for a director and producers is my screenplay Undaunted, based on the true story of slave and activist Harriet Jacobs. Rather than submit to a master that wanted her body and soul,  Harriet hid in a crawl space in her grandmother’s home for seven years. Assisted by her entrepreneur grandmother, secretly activist aunt, and white lover who becomes a U.S. Congressman. Formerly optioned, that screenplay is now owned totally by me. It was just named Winner of the Moondance Interntional Film Festival Screenwriting Competition 2017, and Grand Prize Winner 2018 of Black Screenplays Matter.

An early version of that screenplay was awarded one of ten slots in a special summer program for screenwriters at the prestigious American Film Institute, where I am now a lifetime member.

Harriet's story was also presented in a play To Take Arms, produced to rave reviews at the Tamarind Theatre, Hollywood. This earned me a monetary prize as one of the ten finalists for the Susan Smith Blackburn Award, for plays by and about women. The play is now been titled, like the screenplay, Undaunted.

Also available, screenplay François Villon, the People’s Poet, inspired by the true story of the great medieval poet, François Villon, whose poetry is surprisingly contemporary. He understands the plight of the poor; attacks the power and lack of empathy of Church and State. An earlier version took first-place in the Film Industry Network Contest, 2005. Since then I worked with several script analysts, including top script analyst, Bill Boyle (visualmindscape.com), to put the finishing touches on a new version, written as a comedy given Villon’s ironic sense of humor.

The play Bobby at the Hanging of François Villon, includes a Dylanesque character, alluding to Bob Dylan’s fondness for, and use of, Villon’s poetry. My play and a short story were inspired by Dylan's song Talkin' World War III Blues, the last lines: "I'll let you be in my dreams if I can be in yours." My character named Bobby, and Francois, get into each others' dreams. Fifteenth Century France meets 1960s America.

In Boulder, Colorado, there was a reading of the play Laura and Ibsen, which I directed, on May 18, 2017, at the Grace Gamm Theater, The Dairy Arts Center. The role of Ibsen was read by award-winning Chris Kendall (noted for his solo performance as The Poet in the renowned Boulder Ensemble Theatre Company's production, Homer's An Iliad)  The role of Laura was read by award-winning and Colorado University faculty member Tammy Meneghini (noted for her portrayal at the Dairy Arts Center of Maria Callas in Masterclass). I seek a producer for Laura and Ibsen. I was selected as one of the local playwrights to present my work in the exciting Theatre Made in Boulder, in which work by those selected was presented at the Carsen Theatre, the Dairy Arts Center, January 18 through February 11, 2018. A staged reading of my Laura and Ibsen was performed at 2 pm on Sunday, February 11th, with the same great actors who performed the reading in 2017.

Laura and Ibsen is inspired by an actual confrontation between renowned playwright Henrik Ibsen and Laura Kieler, fellow writer and protégé, whose personal story Ibsen stole in order to create the world-renowned A Doll's House. A play that destroyed Laura Kieler’s life.

One of the purposes of the reading was to offer this play as a possible production at Boulder Ensemble Theatre Company, or another such accomplished theater group, or to introduce to Boulder a reading series similar to that of Source Productions, New York, where I was the artistic director.

Short play, Silent Star, about film star Clara Bow’s conflicts with her mother, performed at the Los Angeles Theatre Center, 1991 and, as a winner of the Lamia Ink Contest/1992, performed at the world-renown theater, LaMama, in New York.

Short play Immortality – inspired by Anton Chekhov’s Swan Song – about an older actress lamenting her waning career, published in Russian in one of Russia’s most prestigious performing arts journals, Baltic Seasons, 2002. Performed at West Coast Ensemble Theatre, Hollywood, and a reading at the Playwright/Directors Unit of the Actors Studio West.

Short story based on play Laura and Ibsen, titled "The Truth about a Doll's House," a monetary winner in the prestigious Baltimore Review Short Fiction Competition.

Wrote 130 reviews of hotels throughout Scandinavia for Northstar Communications, online travel service with a division called STAR for subscribing travel agents and corporate planners. The reviews were so successful that I was offered by the Editor of Northstar first choice of countries; chose Costa Rica, spent two months in 2008 reviewing hotels and updating several destination guides in Costa Rica for Weissmann Reports, an electronic product for travel agents, attached to Northstar.

Feature article about an experience with ravens, “Uncommon Raven,” published in BirdWatching Magazine, August 2014. Wrote for The Drama Review and the e-zines Movebytes.com and Moondancefestival.com. An article written about the influence of playwright August Strindberg on my plays featured in a book published in Sweden 2001, titled Ja, må han leva!, 22 kvinnor om August Strindberg (May he live on!, 22 women artists influenced by August Strindberg).

Several of the following articles and credits are given my legal name, either Nanette Flakes, or Nanette Sue Flakes:

An Ensign in the United States Navy; noted for trouble-shooting for an Admiral at the Naval Supply Center, San Diego.